Celebrations are underway at Newcastle Airport as Balkan Holidays celebrate their 40th anniversary of serving the North East travelling public.

The Bulgarian tour operator, which has flown in and out of the North East’s largest airport since 1979, is marking its milestone Ruby anniversary today (FRI) with a celebration in the terminal.

To commemorate the occasion, departing passengers were treated to tasty cupcakes as they checked in.

The Airport also presented the holiday company with a framed certificate to thank them for their four decades of service.

Since Balkan Holidays started its operation from Newcastle Airport in 1979, we have seen the invention of the internet, the first Boeing 777 was introduced, there have been 10 World Cup finals and six Prime Ministers. 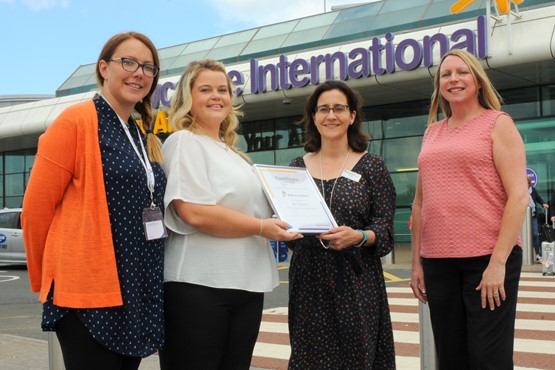 The travel company, which was set up 53 years ago, has sold over three million holidays and is an industry leader in providing great value summer and winter holidays.

Balkan Holidays operates three times a week during the summer to the historic city of Bourgas – where travellers can explore the medieval ruins of Nessebar or lounge on the sands of Bulgaria’s breath-taking Black Sea coast.

The tour operator also offers trips to the modern city of Sofia during the winter skiing season – where visitors enjoy some of the largest resorts in Bulgaria.

Laura Hartshorne, Senior Aviation Sales Executive, said: “It’s fantastic to be celebrating with Balkan Holidays in the terminal as they mark their 40th anniversary here at Newcastle today.

“The charter routes that Balkan operates are very popular with our leisure travellers and offers both sun and ski destinations to our travellers.

“I would like to say a massive thank you to all of our passengers and trade partners who have supported Balkan over the past four decades.”

Richard Knight, Chief Operating Officer at Newcastle Airport, said: “I am very proud that Balkan has reached their 40th anniversary at Newcastle International, this is a very important milestone for both the airport and the operator.

“This anniversary is a real testament to our working partnership over many years and I look forward to many more years to come.”

Louise Newton, Head of Marketing and PR at Balkan Holidays, added: “We are thrilled to be celebrating 40 successful years of flying from Newcastle.

“Our packages really do provide unbeatable ease, convenience and value. We look forward to working together for another 40 years.”

Balkan Holidays all have no hidden extras – therefore always include free 20kg luggage and transfers. Travellers can book their next Balkan holiday by either using their website, or at a local travel agent.