Loganair begins services to Brussels and Stavanger from Newcastle

The first ever Loganair services from Newcastle Airport took to the skies today as the airline officially opened its operating base at the North East’s airport.

It was a triple celebration for the Scottish Airline as it launched flights to Brussels and the Norwegian city of Stavanger as well as opening its second base outside of Scotland.

The 6.25am service to Brussels officially marked the airline’s inaugural service from Newcastle Airport, touching down in Brussels one hour and 25 minutes later. An Embraer 145 then departed at 1.10pm, arriving in the South West Norway at 3.30pm local time.

Airlinks to the two European cities were previously operated by flybmi, which went into administration on February 16, prompting Loganair to step in to secure the important routes.

The carrier is providing early morning double daily rotations between the North East and the Belgian capital of Brussels between Monday and Thursday, while also operating two evening departures on Friday and Sunday. Marking the first time Loganair has included Belgium within its network, the schedule enables a full working day in the European Union’s administrative capital, overnight trips or a number of different weekend options.

It is also offering six services per week to Norway’s Oil Capital, Stavanger on weekdays and Sunday. 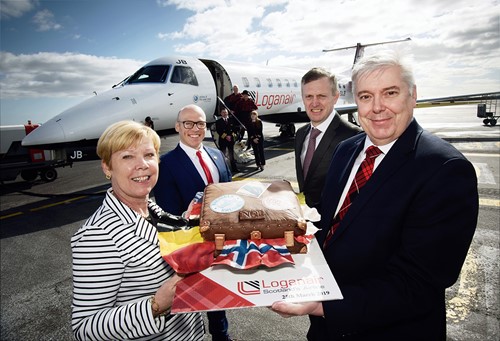 Loganair’s commercial director, Kay Ryan said: “The Brussels service heralds the first time we’ve ever served either Newcastle or Belgium so it could be said this is a historic day for the airline. We’re also pleased to start operating between Stavanger and the North East – which is a popular route for both the energy sector and holidaymakers.

“We’re excited about building our presence in Newcastle and bookings on these two routes have been really positive.”

Richard Knight, Chief Operating Officer at Newcastle Airport, said: “It is fantastic to welcome the Loganair team to Newcastle Airport today, to celebrate not only a brand-new airline to the region but also the continuation of two popular routes.

“I’m sure our passengers will enjoy flying with Loganair to Brussels and Stavanger. Both destinations offer a great city break experience - with Stavanger famed for its natural wonders and Brussels for its historic old town and architecture.

“Loganair offer a great product, high levels of customer service and excellent flight times. With departures six days a week to both destinations and tickets starting from £84, I’m confident the services will be welcomed by both our business and leisure passengers.”

Lead-in fares between Newcastle and Brussels begin at £84, while tickets to Stavanger commence at £85.99. All reservations include 20kg of complimentary hold luggage and passengers are eligible to join Loganair’s loyalty programme, Clan Loganair.