The first flight of a brand new service from Newcastle Airport into the heart of central London has taken off today (7th JAN).

The inaugural flight from the North East’s largest airport to London City departed this morning (MON) taking just over an hour to reach the capital. 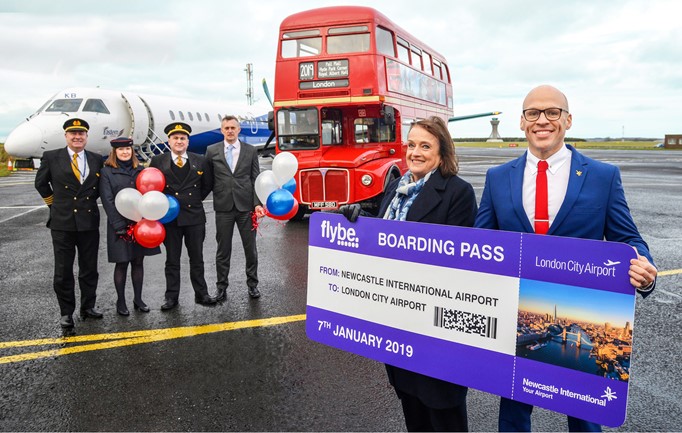 The flight, which is operated Flybe’s franchise partner Eastern Airways, is expected to carry over 17,000 passengers during 2019.

The airline’s new route is the only direct scheduled flight connecting Newcastle with central London, opening both destinations up to more business travel, as well as tourism.

To mark the occasion, an iconic red London bus was driven onto the runway and pictured next to the Eastern Airways Saab 2000 aircraft.

Throughout the week, on the Airport’s social media channels, members of the public will get the chance to win a free trip to London including a two night hotel stay.

Richard Knight, Chief Operating Officer at Newcastle Airport, said: “It is very exciting to see any brand new route take off, but it is particularly special to know that this route will make such a difference to people based in the North East.

“London City is a fantastic new service to add to our list of destinations, and we expect that it will particularity popular with busy business commuters heading down to the capital.

“We expect this service to deliver an increase of tourist traffic to and from the region.”

North East-based businesses such as Sage and Ward Hadaway, as well as business organisations including CBI and the North East England Chamber of Commerce recently said that the service was ‘terrific’ and ‘ambitious’.

He said: “This exciting new service will have a very strong and positive impact for both business commuters and tourists travelling in and out of the North East.

“It will provide a quick and convenient connection right into the heart of London, which I believe will be a very valuable asset to our region.”

Roger Hage, Eastern Airways’ General Manager Commercial & Operations, added: “It is vital that cities like Newcastle, and the North East region as a whole, has strong links with the capital - and our new London City service, on behalf of Flybe, offers the most convenient air link to reach the city and central London.

“London City Airport’s location allows for easy, swift access to Canary Wharf and the London underground for both business and leisure travellers.”

Operating at business-focused departure times throughout the week, the first flight of the day departs from Newcastle Airport at 8:05am, with passengers arriving in London City at 9.15am.

An additional evening flight departs Newcastle Airport at 5.50pm, for arrival in London City at 7pm.

Return flights from London City Airport depart twice a day at 9:45am and 7.30pm. On Sundays, an evening flight operates from Newcastle Airport at 5.50pm.

Flights are available to book at www.flybe.com.